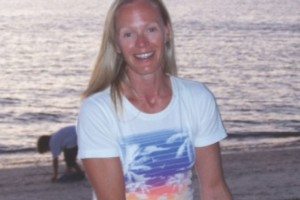 This incredible, inspiring guest post is by WFCC Bayview member Claude Lukawesky, who ran the Scotiabank Marathon here in Toronto this year in honour of a friend of hers who was a survivor of assault. If you’ve ever wanted to know what it’s like to train for and run a marathon as a first-timer, this is the perfect post for you.

It is no secret that I like to work out, and to be honest, I enjoy it.  I have been a member of WFCC  for approximately 10 years at the Bayview location and although they offer wonderful classes, I like to keep to myself and work out on the various machines, stairmill being one of my favourite followed by the treadmill! I do participate in one of the best Boot Camp class with Leigh on Wednesday mornings (love this class and the instructor is approx. my age and does the class with slow and controlled movement which has made me a much stronger person).

This past April, a mom in my neighbourhood was unfortunately involved in a horrific domestic assault and is suffering a major brain injury as well as mobility issues. This woman fought for her life while she was in a coma and is now on the road to recovery. My weekly visits with her over the past few months have brought me to experience something greater than I thought possible. Time and friendship is what I could offer her and worked with her to regain some simple things that were temporarily lost i.e. high fives, making each other laugh, and just listening to her.

We already have a marathoner in my family and that would be my husband, Dave. He truly trains to do marathons and follows the “marathon regime” to no avail (he even dates his shoes so that he does not wear them longer then he should). I enjoy running and have completed three 1/2 marathons and some 10Ks. I go on the treadmill at WFCC twice a week and will alternate between doing intervals for an hour or straight running for an hour. I rarely run outside as I do not have anyone to run with.

Running a marathon was never on my “radar or bucket list” until this past August when I kept seeing my friend struggle with her injury. Then on September 15th, after seeing my friend and witnessing how hard it was for her to get into a wheelchair, I realized that she did not train her body to be assaulted and she did not train her body to have to recover… so there was my “greater than me moment”. I came home after that visit and signed up to do the Scotiabank Marathon that was to take place in Toronto on Sunday, October 19th.

People may think that this is crazy not to do proper “marathon training, including diet restrictions” and I purposely did not tell anyone I was going to do this (except for my gym partner in crime and best friend, Kelly Nicol and my husband….I told them two weeks after I signed up!) so that I would not be criticised. Again, I respect those that do and would never take that away from anyone nor judge them for doing it.

Kelly felt that I needed to get a “long run” in before the marathon so her husband, Malcolm (who was also running the Scotiabank Marathon) took me for a 30K run two weeks prior to the marathon. I felt great as was reassured that I can do this marathon exactly how I intended to do it. I did have a “mantra” and it was DIM=personal success. DIM stands for Determination, Inspiration, Motivation and my friend embodied all of that. Personal success for me truly meant that if I tried then I must be proud of that. We cannot always win or achieve our goals, it is the journey towards all of that that must be embraced.

Kelly invited my family over the night before for a delicious Ragu dinner! I was a little nervous at dinner, but the good company alleviated a lot of that.

Race day morning came and I was excited (a little tired as I only get 3-5 hours a sleep a night…darn kids) and knew that my goal was to enjoy this run and remember why I was doing it. I do not have a runners watch, only my TAG (ironically the battery died so I could not even wear that!) and do not run to any music. Having Malcolm around on race morning was great as he had the nervousness for both of us! Kelly, my husband and our kids were set to meet us as the “dirty 30” kilometre and Dave was going to run with me after that.

When the race started I truly felt great and just knew that this was going to be a “mental” run. I thought of my friend a lot and also the kids that I help coach at Cross Country for Northlea School. When I got to the 10K mark it was wonderful and I thought “okay 20 more K until I see my friend and family), then I was nearing the half and could not believe that the time had gone by so fast and that I was feeling as good as I was. I was instructed to take a gel pack every hour to replace lost nutrients, so I did and I did take sips of Gatorade at every drink station.

At the half marathon point I was thinking “only 9 more K until I see everyone” and continued on. Then came the 25K mark and my calves really tightened and it did not “tickle”. I took a gel pack and had some water and realized that this pain was not severe enough to make me want to stop as I thought of my friend, I pushed through. I definitely would have stopped if I knew that I was damaging any muscles.

I will say that spectators make all the difference in the world because as I approached the next few kilometres to get to the “dirty 30K” I crossed over into “Greek town” and they were cheerleading for all of the runners, it was liberating. Then it came “GO CLAUDE” and lots of happy screaming from Kelly and my family and that really made me want to cry because it became real that I was going to complete this journey now. Having them there was just AWESOME!! My husband then jumped onto the course to join me and I just knew that the next 12 K were going to be great. It was definitely not a “walk in the park” and I felt like I was speed walking more than running…some of the pictures look like my feet are not even leaving the pavement then we got to the 37K and heard again “GO CLAUDE GO” and there was Kelly and the kids again with the best cheerleading anyone can ask for!!
At that point there was only 5K to go and I started to feel the “something greater than me” moment and it felt good so on I went. Next I hear my husband say “you probably only have 20 minutes left” and I was shocked! I was feeling tired at this point but there really was no return, and I practiced what I preach to the kids “relax your shoulders” and my feet started to pick up more! My husband left me with less than a kilometre left as he wanted me to finish this journey: “something greater than me”. At 500 metres left, another man was running beside me, he was still with me at 200 metres and then at 100 metres I looked at him and ran as fast as I could to the finish line, not letting anyone pass me (another tip we coach the kids on for Cross Country).

I would normally have had a big smile on my face, but not this time, I had tears and they were for “something greater than me”. Well I finished and without knowing my timing, I was absolutely shocked when I found out that I completed it in 3:39:36 and placed 20th in my age category for women and 197th out of all the women running and 1050 out of all of the marathoners.

I am happy that this “something greater than me” experience happened and am extremely thankful for all of the support that WFCC offers me. It was so lovely to see a poster put up of me when I came to the gym the week after and it is so heart warming to have other women be so proud of this accomplishment.

With my marathon time, it qualified me for the Boston Marathon in 2016 and I am definitely going to go. Will I change the way I approached this past marathon?, I say no. I will just keep my weekly gym routine and continue to enjoy my food (and wine!).