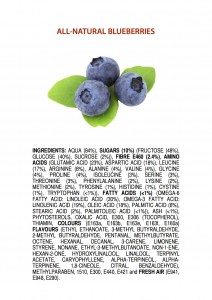 So, what are chemical substances? Chemical substances are substances (solid, liquid, or vapour) that maintain a definite composition and characteristic properties no matter where they are found. For example, a diamond simulated in a lab and a diamond mined from the earth will feature the same arrangement of atoms and covalent bonds. It cannot be broken down any further into constituent parts by common methods. While the diamond can be contaminated by other impurities that change its colour, the diamond itself is chemically pure.

Consider food science. The majority of snack foods that you’ve ever purchased from a store have been “optimized” to create a “bliss point” that works for the largest number of consumers, while saving food manufacturers the largest amount of money within a range. This is exactly why Cherry Vanilla Dr. Pepper tastes the way it does:

On Page 83 of the report, a thin blue line represents the amount of Dr Pepper flavoring needed to generate maximum appeal. The line is shaped like an upside-down U, just like the bliss-point curve that [food scientist Howard] Moskowitz studied 30 years earlier in his Army lab. And at the top of the arc, there is not a single sweet spot but instead a sweet range, within which “bliss” was achievable. This meant that Cadbury could edge back on its key ingredient, the sugary Dr Pepper syrup, without falling out of the range and losing the bliss. Instead of using 2 milliliters of the flavoring, for instance, they could use 1.69 milliliters and achieve the same effect. The potential savings is merely a few percentage points, and it won’t mean much to individual consumers who are counting calories or grams of sugar. But for Dr Pepper, it adds up to colossal savings.

Think about that. The flavours you respond to, even the textures you enjoy most, such as the way Rice Krispies snap, crackle, or pop, or how Chee-tos fizzle on the tongue, are the products of chemical engineering, and their patents are the intellectual properties of corporations who want your money. Can you really say that a certain mass-produced food is your “favourite,” when you know it’s just designed to create bliss point? It feels a little unfair, doesn’t it? It’s all outlined in Malcolm Gladwell’s talk on choice and happiness, in which he discusses Howard Moskowitz, pioneering food scientist, and his work on bliss points for Prego spaghetti sauce.

So, keep that in mind when you think about chemicals. The chemicals themselves are often innocent. As with most other things in life, it’s the chemistry that matters.